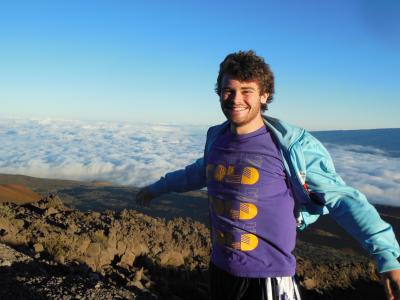 What year and program are you in at the UW?  How is it going so far?
I am currently a sophomore majoring in atmospheric sciences. So far, college is challenging but fun. I'm still getting through my pre-requisites for the actual atmospheric sciences classes that I will start taking next year, and I am so excited to finally be done with these!

How long have you been playing music?  What is your musical background?
I've been playing music for as long as I can remember. I think I started taking piano lessons in first or second grade, but I banged around on our family piano before then. I started playing clarinet in 4th grade and then switched to alto sax for 5th grade. I kept playing alto before switching primarily over to tenor in 11th grade. Right now, I still primarily play tenor, but I play a lot of alto and a bit of soprano as well. I’ve also been learning to play the EWI (Electronic Wind Instrument), which is an electronic woodwind synthesizer that can make a variety of very cool sounds. My parents are not musicians, and I'm the only person I know in my extended family that has played this much music.

How long were you a student at CMA?
Let's see... I took lessons with Steve Treseler starting 7th grade of middle school, and I started taking lessons at CMA whenever Steve moved there, which I believe was in 2007. I continued taking lessons until 2009.

How has your experience at CMA helped you to where you are at today?
I know a lot of great musicians around the area (both teachers and former/current students) from CMA and play with a lot of them around town. I recently recorded an album with another former CMA student, Shohei Ogami, on guitar and bass. I also developed some skills of preparing pieces and arrangements and helping people learn them in an expedient manner through the recording workshop that I would do on Saturdays at CMA.

What’s your favorite part about playing music?
It's really amazing that we, as humans, can invent devices that use air pressure to produce music, so there's that scientific perspective, and it's very cool that music is a universal language and there are no barriers to people being able to appreciate it. I think both of these things are just amazing and they definitely add to my appreciation of music. My favorite part about playing music is just the knowledge that I'm able to create highly emotional melodies and harmonies just by blowing into the horn and pressing down certain keys. I find music amazing in that it is a collection of sound waves that are precisely organized such that there is a link between those physical waves and powerful emotional responses to them.

Who are your current inspirations? What are you currently listening to?
I'm currently listening to a lot of funk-rock guys. The Brecker Brothers, Steps Ahead, and Blue Montreux are all great groups that Michael Brecker is involved in and I am very interested in their stuff. I've also been obsessed with Guthrie Govan's electric guitar playing. I've been trying to adopt a funkier style, and more specifically, I've been trying to use my saxophone to emulate a rock guitar. I’m gradually developing my own musical voice, but I still play a ton of bebop and love it as well.

What current projects are you involved in?
I am in three bands right now. I am in a funk band called Circular Reasoning, and we primarily play originals and covers of 70s funk songs. I am in a brass band called the Ten Man Brass Band, but we’ve never actually played a concert with ten people and there are more than ten people in the band. We busk around the city in the summer, and we typically bring in a lot of money during Folklife and other festivals around the area. We also get hired for private events though… we recently played a gig for the governor at Paine Field in Everett! Lastly, I just joined a UW jazz combo with some fellow students at the University of Washington, and our combo is coached by Luke Bergman, a bassist and faculty member at the UW. I don’t know where we plan to go with this combo, but I’ve already met some great musicians and got some gigs lined up with them

What advice can you give to younger kids that want to get involved in music?
Listen to lots of music. When I was young, I would always listen, and as a result, I would always have melodies floating around in my head. It was really fun and relaxing, and it also helped speed up my improvisational progress.

What are your future goals and dreams?
I’m not exactly sure what I want to do with my major, but I also love to write and share my knowledge with the public, so I hope to end up in a career that will allow me to express my passion for weather to the public. I want to continue to improve at saxophone and be the best musician I can, and I’d also like to relearn clarinet.

Anything else you want us to know about you?
I have a weather blog at ‘charliesweatherforecasts.blogspot.com’ that I’ve been running since my freshman year of high school.